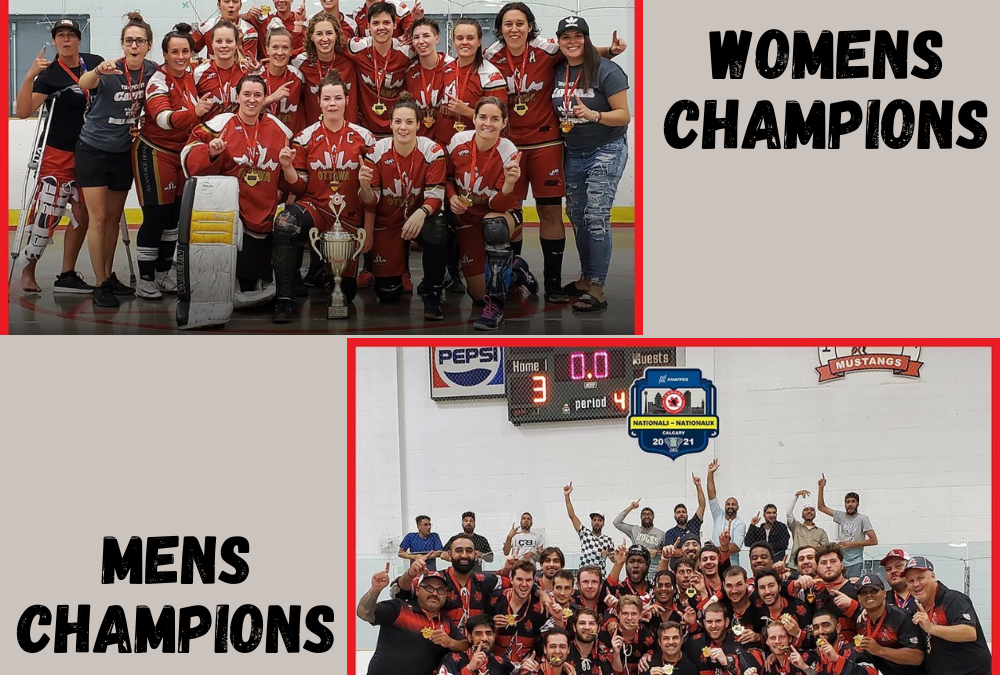 The 2021 Canadian National Championships took place August 9-14 in Calgary, Alberta and the Ontario teams won Gold in both the Women’s A’ and Men’s ‘A’ divisions.

In the Women’s ‘A’ tournament, the Ottawa Capitals defeated the New Tecumseth Xtreme 3-1 to capture the championship in an all-Ontario final. Claudia Bergeron scored two goals to lead the Capitals and Jessie McCann of the Capitals was named Tournament Most Valuable Player. Both Ontario women’s teams won their first four games on their way to the Championship game. Congratulations to both women’s teams for bringing Gold and Silver back to Ontario.

In the Men’s A’ tournament, the Brampton Midnight Express defeated the Edmonton BHC 4-3 in a shootout to capture their 8th Men’s National Championship. Goalie Nicholas Lamb of the Express stopped all the shootout attempts and teammate Jordan Crocker was named the Tournament Most Valuable Player. With the victory, the Brampton Midnight Express have now won a National Championship Gold Medal in four consecutive decades (1996, 1997, 1998, 1999, 2000, 2009, 2011, 2021).

In the Men’s Bronze Medal game, the New Tecumseth Xtreme defeated the Vancouver Falcons 5-3 to capture the Bronze Medal after winning the Gold Medal in 2019. Tournament Leading Scorer Jacob Kelly scored two goals for the Xtreme. Congratulations to both men’s teams for bringing Gold and Bronze back to Ontario.

The Province of Ontario had four teams attend in Calgary and all four teams would come home with a Medal, two Gold Medals, a Silver Medal and a Bronze Medal. An incredible achievement by all the teams representing the Ontario Ball Hockey Federation.